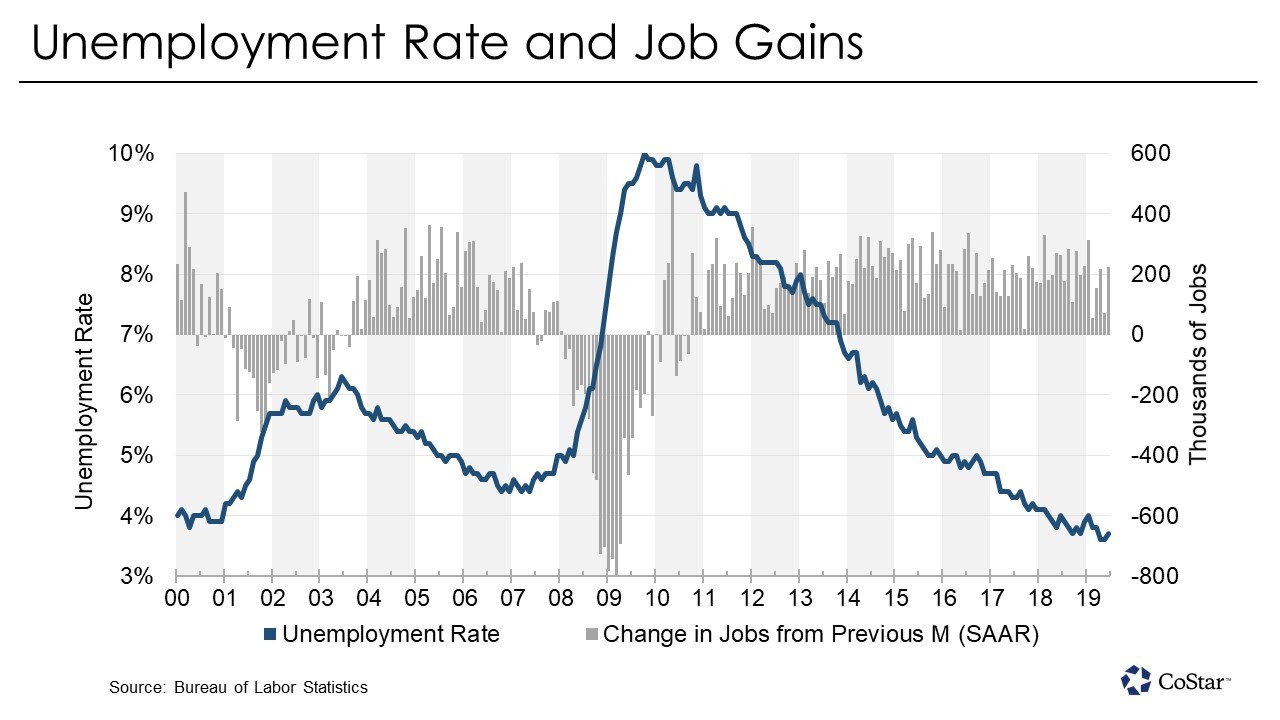 The U.S. labor market’s addition of 224,000 net new jobs in June, blowing past expectations and marking the nation’s 104th month of uninterrupted employment gains, is seen as a positive sign for commercial real estate.

The national employment report released by the U.S. Department of Commerce was surprisingly strong, overcoming global trade uncertainties and slowing economic momentum in Europe and Asia. The new hiring will probably translate into more demand for office and industrial space.

However, the report will also temper expectations that the Federal Reserve will make multiple rate cuts in the second half of 2019, something that many investors had hoped would transpire.

Despite the robust job growth, the U.S. unemployment rate ticked up to 3.7% as almost 160,000 people joined the labor force. The labor participation rate increased by one percentage point to 62.9%, not meaningfully different from where it’s been for three years. The participation rate for prime-aged workers ticked up to 82.2%, also a welcome sign.

Revisions to previous job reports trimmed employment gains in April and May by 11,000 jobs, bringing the three-month average job gain to 171,000 per month and the overall average in 2019 to 172,000 per month.

While positive, this a marked slowdown from the average monthly gain in 2018 when an average of more than 220,000 jobs were added per month. Year-over-year job growth is now 1.5%, the slowest rate since January of 2018.

Hourly earnings rose 0.2% over May, leaving the year-over-year increase at 3.1%. With inflation running well below wage growth, real earnings for workers are still on the rise.

Job gains were seen across almost all major sectors in June. The powerhouse of office-using employment, professional and business services, added 51,000 positions, including 29,900 higher-paying professional and technical services jobs, and 16,200 in administrative and waste services, one-quarter of which were temporary positions.

Health services also posted strong job growth, adding 50,500 positions with 29,500 of those in hospitals and medical offices. Accommodation and food services added 9,300 jobs, with gains of 9,600 jobs in accommodation. Governments added 33,000 jobs, most of which were local non-education government hires.

Job losses continued for the fifth consecutive month in the struggling retail industry, which shed 5,800 jobs in June. Building materials stores, gasoline stations and sporting goods stores all added jobs, while May gains by big box retailers such as warehouse stores, and by non-store retailers such as Amazon, were reversed by losses in June. Clothing and department stores continue their long decline in employment. Retail employment is now at its lowest level since January 2016.

On the goods side of the economy, job gains were moderate. Construction added 21,000 positions and the manufacturing sector added 17,000, a boost after several months of lackluster gains and defying the pessimism expressed in recent surveys. Gains were seen in both durable goods and nondurable goods industries.