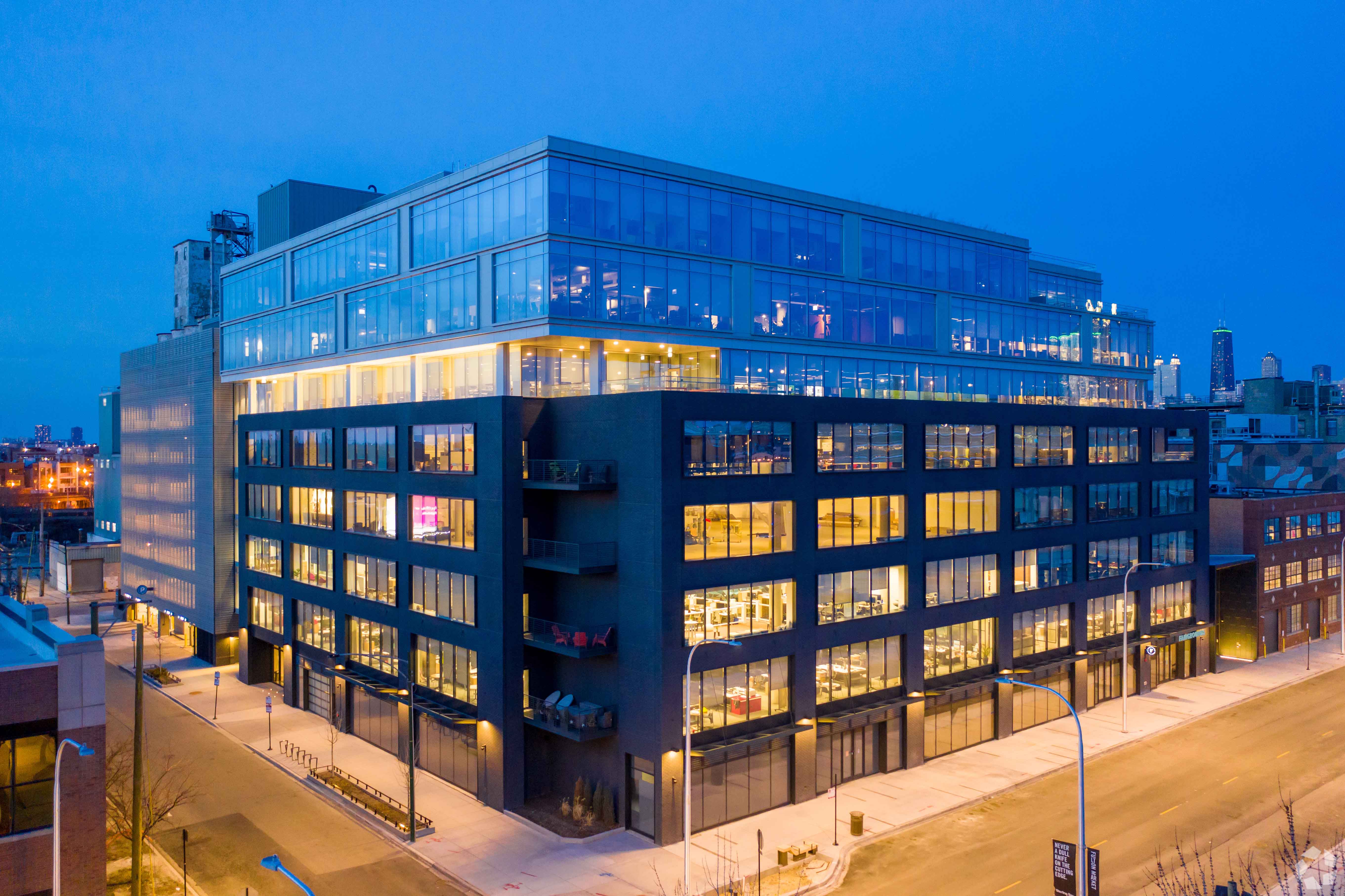 Commerz Real, whose most recent U.S. purchase was 1330 W. Fulton St. in Chicago, would like to expand its American office holdings. (CoStar)

Demand for office space fell sharply in the second half of last year, and the pandemic’s effect on the commercial real estate sector is seen as possibly producing even worse quarters in 2021. But some investors see opportunity.

While it could take several years before the office market returns to pre-pandemic levels, these latest projections from industry analysts and executives aren’t deterring major companies from seeking relative bargains. And one report said international investors find appeal in the liquidity available in top-tier U.S. cities.

Demand for office space fell as working from home in the pandemic has at least temporarily curbed the need for space for many firms, according to Nareit, the Washington, D.C.-based trade group for real estate investment trusts. And many employers have said the effectiveness and efficiency of work-from-home arrangements could change how they use offices over the long term.

“It will be several years for office to return to pre-pandemic performance. Vacancy rates and rent growth generally lag the macroeconomy, and even lag the bottom point in demand at times,” Calvin Schnure, senior vice president of research and economic analysis at Nareit, said in an email to CoStar News. “I’d expect vacancy rates and rents to reach bottom (or, top in terms of vacancy) at least a year from now.”

The technology-focused markets of San Francisco and San Jose, California, are far worse off than the rest of the country when it comes to vacancy rates, according to Schnure. And there’s a split between large urban centers and smaller secondary cities, Nareit data shows. Demand weakened almost across the board, but the impact on vacancy rates was much higher in big cities, up nearly 200 basis points over a year earlier, than small ones, which were 150 basis points higher.

In terms of rent growth, the split is even greater. Nareit said big cities saw declines as much as 8% in San Francisco and nearly 3% in New York.

Gains in Smaller Cities
In the next tier of metropolitan areas, though, more than half had positive rent growth over the past year — and markets with rent rising more than 2% included Charlotte, Raleigh and Durham in North Carolina; Jacksonville, Florida; and Sacramento, California, according to Nareit.

“Bottom line: While the pandemic and work-from-home are affecting the office market, the impact on rents and vacancy rates is concentrated in the gateway cities with higher rental costs, and also the tech markets where workers and firms may be more adept at work-from-home … or from the beach or the mountains,” Schnure said.

In the past week, Moody’s Analytics also issued new forecasts for office rents and vacancies, saying “the office sector will suffer more in 2021 than it did in 2020.”

Moody’s forecast said the sector may not bounce back until 2026. The outlook is noteworthy in that it is particularly more grim than CoStar analysts’ own forecast.

Last quarter’s negative net absorption came as the industry had about 45 million square feet of completions, pushing the vacancy rate past 11% for the first time since 2015, according Michael Roessle, director of U.S. office analytics for CoStar.

“Looking ahead, these trends are expected to continue into at least the first half of 2021, culminating with the vacancy rate matching the peak following the Great Recession in 2010 at 13.1% in the first quarter of 2022, then begins to decrease as demand returns and the supply pipeline cools,” Roessle said.

An avalanche of sublet space flooding the market will also continue to contribute to the rent declines as those offices are often discounted upward of 20% compared to direct rents.

“However, while growth turned negative, we haven’t yet seen the extraordinarily steep rent cuts from a decade ago repeated,” Roessle said. “Our forecast calls for rent growth to drop to a negative 5% in the first half of 2021 before slowly heading back to pre-pandemic levels by the second half of 2022.”

That moderate outlook could help keep office buildings an attractive investment, particularly from global investors, according to Colliers International’s outlook.

Wiesbaden, Germany-based Commerz Real is one such investor ready to return to the U.S. office investment market once current travel restrictions resulting from the pandemic are lifted, Henning Koch, global head of transactions, said in an email to CoStar News.

Among Commerz Real’s $40 billion of assets under management is a U.S. property portfolio of $2 billion including office, hotel and high-street retail. Koch is taking a long view of the office market.

“We consider the current market environment as quite attractive for an investment, especially in comparison to current pricing levels in Europe, in particular in Germany,” Koch said. “We clearly face challenges [in the leasing] market and the huge subletting market at the moment. However, we are only focusing on prime inner-city locations and have a very long investment horizon. That’s what differentiates us from other, more short-term oriented investors.”

Corporate Strategy Corporation is a national commercial real estate strategy, development & execution firm representing mid-size and Fortune 1000 companies throughout the country. Delivering services in more than 60 US cities, Corporate Strategy Corporation, along with its affiliated partners bring more qualified experience per professional to each assignment than any other national commercial real estate company in North America. For more information visit www.corporatestrategy-corp.com.